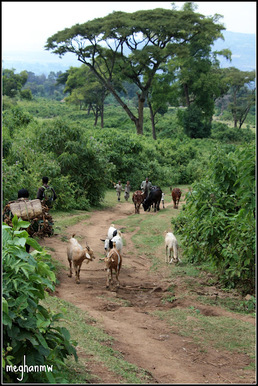 Ethiopia is one of the oldest countries in the world, and the oldest independent country in Sub Saharan Africa. The Queen of Sheba is said to have visited King Solomon in 1000 BC. Scientific evidence suggests that what is now Ethiopia may have been home to the earliest humans. The skeleton of “Lucy,” an Australopithecus afarensis of the Hominid species, was discovered in the Hadar region of Ethiopia in 1974; the species is believed to have lived in the area about 4 million years ago – and perhaps even earlier.

Fragments of more than 300 other individuals of the species have been discovered in the region. The King James Version of the Bible contains the word “Ethiopia” 45 times, usually in reference to all the land south of Egypt. The wife of Moses is said to have been Ethiopian. St. Philip baptized the first person into the Christian faith – an Ethiopian eunuch – in the Gazan desert.

The land of Ethiopia is geographically diverse, with lakes, rivers, savannahs and mountains. The country has 24 major wildlife preserves as well as a variety of rare indigenous animals. Ethiopia is the birthplace of coffee – considered by many the finest in the world. Coffee derives its name from the Kaffa province of Ethiopia, and generates 60 percent of the country’s total export earnings. Its flavor is uniquely smooth and savored for its high acidity and rich, full body.

Ethiopians are a hospitable people, and coffee is part of that tradition. An elaborate coffee ceremony is an integral part of the cultural and social life in Ethiopia, and a visitor invited to the ceremony considers it an honor.
Ethiopia is a country of more than 77 million people living in an area the size of Texas, Oklahoma and New Mexico combined. The per capita income is $130 per year.

Due to a combination of factors including political unrest, drought, and geographic isolation, United Nations Development Programme’s Human Development Index (which measures countries’ social and economic well-being) ranks Ethiopia 171st out of a total of 174 nations.While malaria, HIV/AIDS, tuberculosis, meningitis, and complications in childbirth are the leading causes of death in Ethiopia, and with an average life expectancy of 42, the country has fewer than three physicians per 100,000 people (World Health Organization) – most of them practicing in the larger cities such as the capitol of Addis Ababa, and virtually none of them serving the majority of Ethiopians, who live in rural areas.

Moreover, the costs of living and health care are increasing. “It has become nearly impossible for the majority of the population to go to private hospitals and clinics,” says CAAT founder and executive director, Mulusew Yayehyirad. “People become more and more dependent on public or government-owned clinics. As the country’s population and medical needs rise, those government-owned clinics have become overcrowded and unable to fulfill the needs of the patients. People are forced to travel up to 10 hours by foot to get to the nearest run-down, under-equipped clinic.”

If a person in need of medical care is lucky enough to make it to a clinic, says Mulu, they’ll likely find that it is “not equipped to provide basic health care to pregnant women, TB patients, HIV patients, immunization for children and those in need of minor surgery. The majority of those clinics don’t have running water and shelter for the patients and their families. The buildings are run down due to lack of proper maintenance.”

Health conditions for women and children are particularly dire. About one in 10 infants dies before their first birthday (World Bank) and for every 100,000 childbirths, 850 mothers die (World Health Organization).

Almost 60% of women marry before age 18 (National Committee of Traditional Practices of Ethiopia); women give birth to 6 children on average(United Nations Population Division). And at least 80% of females ages 15 to 49 have undergone female genital mutilation (FGM) (UNICEF), an ancient traditional practice that can result in a variety of physical and emotional complications.